My husband and I were semi-talking last night on the way home from work. We were both absolutely brain-dead and mostly just spouting news stories at one another. It went from the court ruling against Tim Eyeman to the loss of required dispensation of Plan B in Washington to the first ever veto override of Bush Jr. At which point, I seemed to wake up because I started ranting about the Democrats and their supposed political power. So much for actually doing anything when they've got it, if they can't even override the S-CHIP veto and give kids health care. The best part? They've increased the funding for abstinence only education. It's been proven that it doesn't work, and teaches kids that condoms and birth control are dangerous. Go Dems!

My husband, peacemaker that he is, tried to justify their action as a political play for something more important later on. I don't buy it, but I love him so I'll let him have that little delusion. It makes him happy.

But today I saw this. And it just cracked me the heck up. So true. 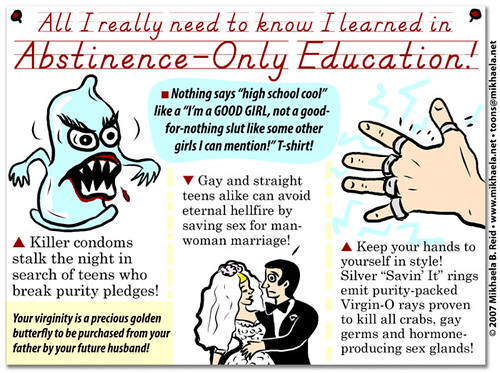